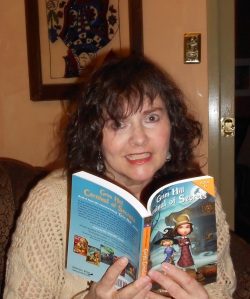 I began writing short stories publishing horror fiction in ChiZine, science fiction and dark fantasy in Canadian magazines NeoOpsis and Storyteller, and in anthologies.
The idea for my first children’s novel hit me out of the blue while I was watching my son play soccer in October. The fog rolled down the hill and onto the field, and I knew I wanted to write a spooky story about Halloween and a diabolical soccer match.

I didn’t want to write about the usual witches, ghosts and black cats around Halloween, although I love that spooky fun. Instead, I began digging into Halloween’s roots and the ancient traditions of Samhain. Suddenly I had a Halloween story with evil fairies and Celtic mythology that I called, The Secret of Grim Hill.

Right out of the gate, Grim hill had a full page review in the Globe and Mail, was chosen as one of the best books of 2008 by the Canadian Toy Council, and was the winner of the Ontario Library Association’s Silver Birch award.This led to a sequel, and then a series where the books have made it to the Canadian bestseller list and have been translated in French, Spanish and Korean.

So much for my little soccer story:)